You are here: Accueil 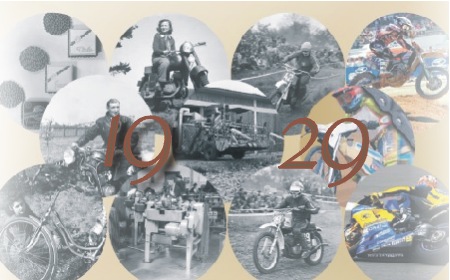 More than 80 years of existence and 350 million meters of chains. Only a few chain manufacturers in the world can show off such a long flow production. The whole this period the chain production in Strakonice was orientated whereon the quality which arized from the philosophy of production scope of all extensive complex of CZ company.

The chains began to be produced in Strakonice as one of the components necessary for manufacturing of bicycles which, except the guns, began tobe manufactured at the CZ factory in the year 1928.The own chain production has been also supported by own developtment and fabrication of machines for chain making beginning by presses and ending by assembly machines. These machines were delivered to many chain factories all over the world. The products of Strakonice are driving the gearings in more than 40 countries of the world and our customers know them for a long time under the marks "Velo", "favorit" and "CZ".

During all these long years the factory staff tried to supply high-quality products responsive to customer requirements. Also a wide assortment of special chains with more than 2000 types in our offer can satisfy a large clientele. 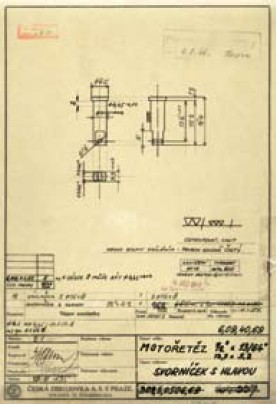 In the year 1929 the South Bohemian Gun factory (original title for CZ), already ten years after its foundation, produces the guns, but with the view of not to target the production of guns only, then the management begins to think over some civil production responsive to market requirements. The choice fell on Bicycle production dating by the year 1928. The philosophy which was applied at CZ from the beginning led to high-quality manufacturing. With the view to realize the quality at that time, it was better to produce all components by oneself and that is why the decision to master the chain production was not long time coming. Already during the year 1929 the bicycle chains began to be produced on machines taken over from chain manufacturing in Kralupy nad Vltavou. Together with machines also a couple of workers came to Strakonice that helped to initiate the production in new conditions. It is necessary to mention the name Oldřich Vlasák which is considered to be a promoter of chain production in Strakonice and which everything personally piloted for years. To the bicycle production took up subsequently also the manufacturing of bicycles with auxiliary motor and motorcycles. All these products need chains for their driving mechanism and that is why the production fitted these new types of chains into its manufacturing programme without any problem.

The war events in the World didn´t wish to civil production very much, so the potential of South Bohemian Gun factory was full exploited again, this time to manufacturing of guns for German army. 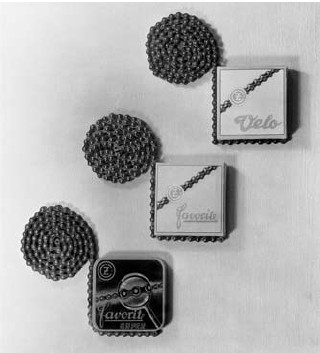 The chain production was
very small that time and the workers had to master the manufacturing of machine-gun bands for projectiles. But it was an apparently similar product only, maybe only because it was also assembled from the links such as a chain. Till after the war in 1945 the chain production got under way again. It was necessary to repair the damaged economy and that is why the
original production of bicycle and motorcycle chains

had to be quickly extended by adding of Industrial chains as well as the Timing chains for car engines. In the year 1946 the first toothed chains began to be manufactured which served as spare parts for motors of American cars remaining still from the wartime. Also this one, unusual chain that time, has been produced succesfully. A big part of the output the domestic motorcycle industry absorbed which began to be very strong. The deliveries of Triple chains for new motors of car factory Skoda started and the cars Skoda used to mount CZ chains till the year 2003.

The socialist economy after the year 1948 boomed and construction of new machines and facilities was on the increase for ex. the motorcycle production in Czechoslovakia of that time reached the gratest output. This period was very strained for chain manufacturing because the chain consumption raised widely, but the old-fashioned machines couldn´t give the required achievement. With a view to increase the capacity, it was then 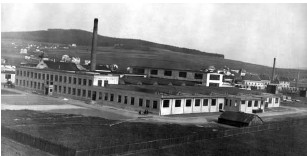 approached to the production of new machines, but they were only some improved copies of original constructions. In those years already the whole assortment of chains according to Standards BS has been manufactured – namely from single till triple chains, but the single chains only were assembled machinely, the remaining chains then by hand. In 1950 together 522 employees worked in chain production and their number gradually raised proportionally to the market requirements. In 1956 already 876 employees worked in chain production in order to manufacture 2,4 million meters of bicycle chains nad 1,1 million meters of other chains. In the year 1958 the chain of pitch 25,4 mm has been added in the production. Thereby the range of products from the pitch 6,35 mm till 25,4 mm has been given for years. The riders are gaining the sporting successes with CZ chains especially in motorcycle competitions.

This period seems to be of cardinal importance for chain production because a lot of fundamental changes occured. Already in 1960 a self-containing designing department for chains and chain machines has been established. The management of chain production was aware of the fact that when they wanted to offer high-quality products to customers so then they had to be tested and that is why 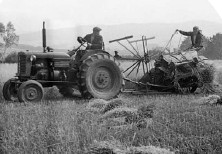 also a Testing department and Development shop for machine prototypes together with Designing department were established. This decision was very important for further intensive modernisation of industrial process and manufacturing cost reduction. A lot of chain types began to be assembled mechanically and also new industrial processes have been used. The reputation of CZ chains in the world as high-quality products was already considerable and the impulse of customers required the sales of CZ chains by means of Foreign Trade Corporation MOTOKOV all over the world. Earlier the chains have been exported as motorcycle spare parts only. The sixtieth were successful for CZ chains also in motorcycle sport – namely in Motocross, competitive and on-road races. The CZ chains mounted in CZ motorcycles gained several titles of World Champions. 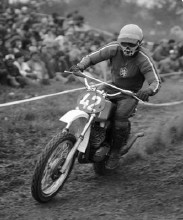 The political disagreements in the society at the end of the sixtieth in no way showed themselves in chain production. 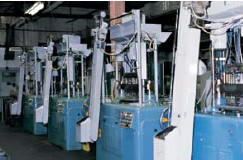 On the contrary, it is possible to say that the seventieth brought new Heat Treatment, new machines for chain plate pressing and a modern conception of chain assembly to the chain manufacturing. By means of those turning points the reduction of the number of employees as well as a growing number of the produced meters of chains occured. The production orientation was still the same, classified into area of bicycle chains (with production of about 6 million meters per year) and into area of industrial chains. That time the industrial chains were applied also to motorcycles and mopeds, a small quantity of chains only was manufactured especially for sporting motorcycles. No small percentage from chain manufacturing was destined for automotive engine distributions.

The further important decennium showed that the workers of chain development department would manage also still an unknown sphere of business – namely the saw chains. The making has been ordered by Ministry of Water and Forest Service and the saw chains got into series production in 1988 with production quantity 30,000 meters a year. Not only the production of saw chains was dominant for this decennium, but for ex. in 1982 the most chains per year in the history were manufactured – namely 10,12 million meters with 574 employees 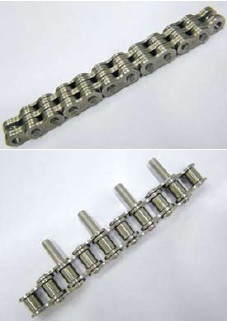 The basic political transformation in 1989 and the resulting democratization in the whole society together with new possibilities and opportunities brought a change also for chain manufacturing. A longstanding orientation of chain sales into western territories represented a big advantage for this period and it did no problems with a direct dealing from the factory which was not possible earlier.

Relatively quickly and easy a large Trade network of commercial agents was built up in the whole world which is carried on and governed all the time. The new management made over the chain production to independent Limited Company by which legal independence and a lot thereof resulting benefits were gained in 1994. The team of designers and technicians developed a new range of motorcycle chains which would accomplish exacting requirements of all kinds of motorcycles. The method of diffusion chromium plating of pin surface ensuring a very small wear represented the priority for chain working life increase. The motorcycle chains are innovated all the time so that the Trade mark CZ could be from among best ones in the world.

The company got possession of Quality Certification ISO 9001 and further certificats VDA 6.1. followed. The company orientates oneself more and more to high-quality products due to low-cost chains originating from eastern countries coming on the world markets. 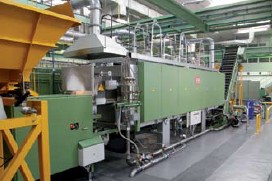 Due to the tradition of high-quality chain production and experience in the manufacturing of new generation of motorcycle chains the workers of CZ started the development and subsequently also the production of chains for modern automotive and motorcycle engines. The management is fully aware of the fact

that the future must be found in the making of a high-quality product which cannot be offered by the cheap competition from the East. Nevertheless the quality can be reached by means of first-rate production facilities only and that is why big capital investments from the machines through assembly halls, test-rooms, new organization till Quality Certification as per ISO TS 16949, ISO 14001 and acknowledgement „Safe Enterprise“ have been expended. A hard and honest work of the staff showed to the world that the Czech product can be a good-class commodity utilisable for many world-wide car and motorcycle manufacturers which mount it into their products. So, we can say that the technical level of the products from Strakonice, thanks to its modern technology and test-rooms, is high and that the company can be ranked among the best ones in the world. Several titles of World Champions in Motocross and significant successes in World Championships in Enduro and Superbike races document what was said.

In 1995 , production CZ will open in a highly competitive market: the karting sector. Until then, the Japanese products were alone in the world , but the success of the CZ motorcycle market leaves naturally thinking CZ home designers that the presence in this sector is essential.

Chains karts are subject to considerable efforts to liaise with their small size, especially with regard to the 219 model used on “without gearbox” classes.

This is not really a real challenge: technology acquired over the years by CZ will allow the production of a range of channels " Karting " unusual .

Indeed, the quality of steel used for the manufacture from the most prestigious Germanic steel factories combined with know-how unusual they gave rise to products well above the usual standard .

In recent years, through dynamic new importers, CZ chains have pushed habits and becoming more and more like a master - choice in all categories with already beautiful victories key competing.

Like other high-tech products previously manufactured in Strakonice, Czech Republic, try a CZ chain is believing !